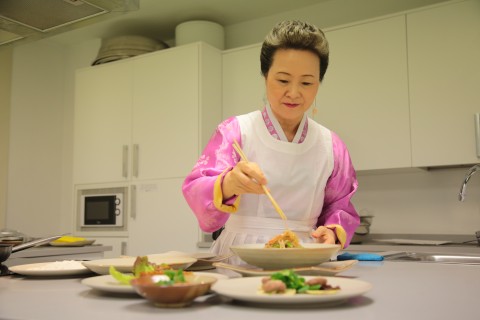 KFF chose to the theme ‘Korean Cuisine Meets Fresh Vegetables and Fermented Condiments’ and introduced many Korean dishes that exhibit the enhanced flavors of traditional fermented condiments, including the soy sauce and soybean paste. Many epicurean experts from around the world recognized these dishes as the future of healthy food.

MAFRA and the Korean Food Foundation operated their Korean food booth for three days attracting a total of 4,000 visitors including food industry experts and famous chefs. Daily tasting shows were held serving dishes prepared with the Korean traditional fermented condiments; menus were slightly altered in ways that were more familiar to the foreign visitors to increase popularity.

This year, KFF was successful in introducing Korea’s healthy food options, utilizing dishes that were prepared with Korean traditional fermented food ingredients and unfamiliar, low-calorie foods like agar and seaweed. Many industry players were pleased with the various menus that were introduced and demonstrated on each day of the festival.

The media in Spain that participated in the demonstration, TVE and TELE CINCO reported the value of fermented food, which is the popular trend impacting the global cuisine. They acclaimed the superior value of Korean cuisine with various fermented dishes that use the fermented condiments such as soybean paste and hot pepper paste.

On the last day, Chef Jae Duk Jung demonstrated how to make the ‘Healthy Vegetables and Seaweed Chips’ at the Multipurpose Hall. The dish was prepared with common vegetables such as potatoes, but attracted the appetites of people with its unique textures and flavors.

Celebrating KFF’s participation in Madrid Fusion this year, a cooking class for the public and media was held at Madrid’s Korean Cultural Center on the 24th. The class allowed visitors to fully ‘experience’ Korean cuisine versus simply ‘visiting’ it. One of the participants José Gonzáles said, “I’ve always been intrigued by Korean food, but never imagined that I could cook it myself. This class has made me realize that the cooking process of Korean food was not as complicated when it came down to maintaining the original flavors of each ingredient. Now, I want to try making Korean dishes at home!”

“Many people around the world are turning to fermented food,” said Chairman Sook Ja Yoon of KFF. “We were able to successfully conclude the event because we focused on introducing Korea's original, traditional fermented condiments.” She added with emphasis, “Madrid Fusion will be the start of our efforts to register the traditional condiments of Korea as UNESCO World Heritage.” Finally, she said, “As the foundation of Korean cuisine for locals in Spain, our cooking class will present numerous opportunities for people to visit, discover and truly experience Korean food. We hope to raise awareness and motivate people to purchase Korean food ingredients.”