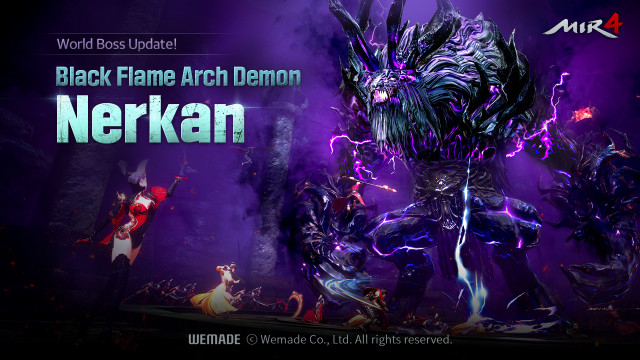 Black Flame Arch Demon Nerkan will appear every Tuesday at 7 pm in a sealed state on the fourth floor of Black Flame Abaddon in Redmoon Valley. Once the seal is released, the battle will begin; players with sufficient power and the courage to take on Nerkan will need to unite if they want to have a chance of defeating the Arch Demon. If Nerkan is defeated, players will acquire various items that will help them to grow, including epic Blue Dragon Statues, Enhancement Stones, and Skill Tomes.

Meanwhile, recent updates such as Seoul Spooning 2022 and MIRAGE continue to expand the game’s economic endeavors as MIR4 strives to create a more advanced economy through utilizing blockchain technology.

A new game token, HYDRA, was unveiled through Seoul Spooning 2022 in January to expand the game’s blockchain functionality into the DeFi space. The HYDRA Staking Program (HSP) was also announced along with the implementation of various other economic policies. Further additions include a revolutionary NFT staking game, MIRAGE, which allows NFT characters from MIR4 to compete against each other in a web environment to mine Darksteel and Septaria and earn other rewards. This launch expanded the use of NFT characters as well as the economic development of MIR4. MIRAGE is the first instance of a secondary game built to utilize NFT characters that were obtained in MIR4 to obtain currency in MIRAGE that can then be transferred back to MIR4 - creating an inter-game economy.

MIR4 is Wemade’s representative P&E (Play and Earn) game, and through MIR4, Wemade plans the continuous introduction of a variety of new economic systems and game contents so that players can enjoy a more advanced economy and an immersive and fun gaming experience.

Wemade offers a global blockchain platform, WEMIX, on which games of all genres can be transformed into blockchain games. Many games are currently being serviced on WEMIX, and it aims to service 100 games whose key currency is WEMIX Token prior to 2022 year-end.