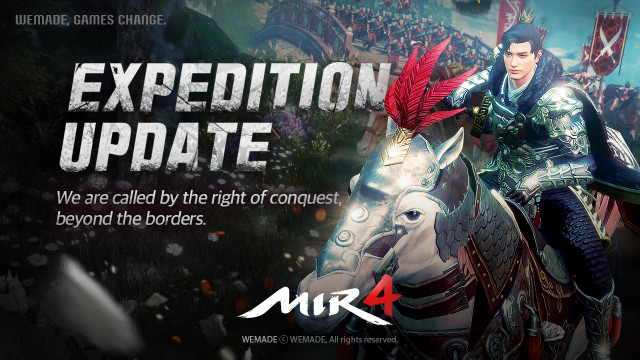 MIR4 has new, cross-server content called ‘Expedition’. Through Expedition, players can either join expeditionary forces to invade neighboring servers and attack their field bosses for rewards or help their native server defend against oncoming Expeditioners. Players will be able to engage against other servers for up to four hours during the Expedition window. Expeditioners will only be able to move to limited areas when invading a server, and must meet certain criteria as well as having an ‘Expedition Participation Ticket’ to join. When Expeditioners have exhausted all their health or the allotted Expedition time comes to an end, they will automatically be moved back to their native server.

Along with Expedition, the Portal for the 7th Floor of Magic Square and Secret Peak has been opened. Courageous players that are willing to accept the challenge of fighting fierce, high-level monsters can venture in to reap the rewards or face their ultimate demise.

On April 19, we will see the introduction of another new feature, the Altar of Darkness. An altar will appear in the valleys of every server during Expedition between 9 and 10 pm. Players who attack and destroy the Altar of Darkness on other servers will not only obtain bountiful rewards but also reduce the amount of Darksteel that can be mined in that valley, which may heavily impact the yield that players on that server can receive.

Also from today’s update, a new payment system called ‘Hydra Payment’ has been introduced. This utilizes Hydra as a means of payment for packages in the in-game store for the PC version. Players now have a choice between various payment options within MIR4 when purchasing products. The price, when purchasing with the new Hydra Payment, will change once every day depending on the Oracle system, which is created by the Trinity Algorithm. This will allow the MIR4 ecosystem to maintain its balance between players, earners, and holders; allowing everyone to enjoy an expanded game economy.