Ali Banat, Founder of Muslims Around The World, Receives TRT World Citizen Award in Recognition of His Lifetime Contributions to Society

TRT World held its annual World Citizen Awards ceremony in Istanbul on November 25 to honor people who have made great contributions to society. Ali Banat was granted Lifetime Achievement Award for donating his wealth to charity after a cancer diagnosis, and for founding MATW-Project. 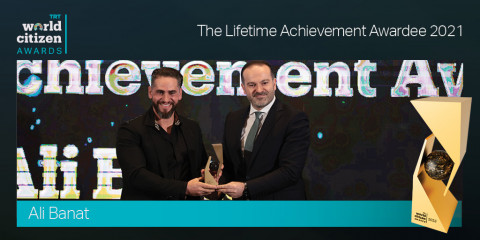 Ali Banat, Founder of Muslims Around The World, Receives TRT World Citizen Award in Recognition of His Lifetime Contributions to Society
ISTANBUL--(Business Wire / Korea Newswire) December 05, 2022 -- The ‘Muslims Around the World Project’ (MATW-Project), a new-generation non-governmental organization building heritage with global impact, was founded by Ali Banat, who passed away from cancer at a young age. To acknowledge his contribution, TRT World Citizen Awards, an organization that honors people who contribute greatly to society, has granted Ali Banat its Lifetime Achievement Award. Mahmoud Ismail, Ali Banat‘s friend and the CEO of MATW-Project, received the award at the ceremony in Istanbul on November 25 from TRT World, the international English language broadcaster operated by Turkiye’s national broadcaster TRT.

Ali Banat was an Arab-Australian businessperson who owned a security and electrical company and died in 2018, following a struggle with cancer. Following his cancer diagnosis in October 2015, Ali Banat donated all his wealth to charity and founded MATW-Project.

Mahmoud Ismail expressed his thoughts about the award, saying, “We lost Ali Banat but his legacy lives on in what he did for the world and for charity. His MATW-Project, based in Australia, carries on its business with a strong presence in many countries worldwide, especially in Africa. We would like to thank TRT World for recognizing the contributions of MATW to the world and granting this award to our founder Ali Banat.”

This year, the TRT World Citizen Awards held its award ceremonies for the third time. The ceremony was attended by many international people from different parts of society, such as politics, academia, arts, entertainment, humanitarian aid, and business.

This non-profit organization cherishes Ali Banat's legacy and contributes to positive change worldwide. With its 774,000 supporters on social media, the MATW-Project has built more than 950 water wells in Africa to make up for the water shortage, supported more than 1,000 orphan children and touched the lives of more than 3 million people.

The MATW-Project operates on a 100% donation basis, meaning that every donated amount is given to those in need, and provides humanitarian support in countries such as Bangladesh, Pakistan, Palestine, Yemen, Syria, and Afghanistan. It also provides shelter, access to water, education and guidance services in challenging living conditions.

Explaining that they want to maximize the impact of donations through a sustainable model, Ismail concluded his speech: “At the MATW-Project, we strive to build equitable and fair living conditions compatible with human dignity; inspired by our values of reliability, efficiency, sustainability, impact, and belief. I hope that this Lifetime Achievement Award from TRT World to our Founder Ali Banat will help further raise awareness of the MATW-Project's activities by reaching more people around the globe.”