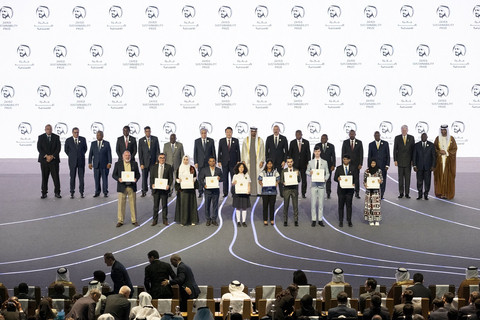 The Prize’s Awards Ceremony coincided with the beginning of the 2023 Abu Dhabi Sustainability Week (ADSW).

Also, present were various heads of state, ministers, and other senior-level dignitaries from the UAE and abroad, in addition to past winners, and the 2023 finalists.

His Highness Sheikh Mohamed bin Zayed congratulated winners across the five categories, reasserting the Prize’s role as a global catalyst for sustainability and humanitarian action.

In his remarks on the Awards Ceremony, His Highness Sheikh Mohamed bin Zayed, said: “The UAE continues to lead on important global initiatives at the heart of our mission to create a better future for all, both within the UAE and beyond our nation’s borders. The bold ambition of the Zayed Sustainability Prize remains at the forefront of these efforts. It creates a pathway for delivering life-changing humanitarian aid and solutions to communities around the world.”

Sheikh Mohamed bin Zayed Al Nahyan underscored how this year, which marks 15 years of the Prize, will also be a historic year for the UAE as it prepares to host the 28th session of the Conference of Parties (COP 28) to the UNFCCC (United Nations Framework Convention on Climate Change). Against this backdrop, this year’s awards serve as an important reminder of the need for greater international collaboration to mobilise climate action and create sustainable economic and social development opportunities across all nations, including the global south.

His Highness continued: “Over the last 15 years, the Zayed Sustainability Prize has successfully built upon the legacy of the UAE’s Founding Father, Sheikh Zayed, and carried forward his bold humanitarian vision, ensuring that the resources of our great nation are fully used to the benefit of all people. Today, the Zayed Sustainability Prize stands an internationally recognised award that mobilises innovators, social entrepreneurs and young people to accelerate positive change for our planet and all people.”

The US$3 million Prize is the UAE’s pioneering global award in sustainability that recognises and rewards small and medium-sized enterprises, nonprofit organisations and high schools around the world that are delivering impactful, innovative and inspiring solutions in health, food, energy and water.

Through its 96 former winners, the Prize has transformed the lives of more than 378 million people around the world since 2008, including in Vietnam, Nepal, Sudan, Ethiopia, Maldives and Tuvalu. In the Health, Food, Energy, and Water categories, each winner receives US$600,000, while the Global High Schools category has six winners, representing six world regions, with each winner receiving up to US$100,000.

His Highness also emphasised the need to develop bright young people into the critical thinkers and sustainability leaders of tomorrow, and praised the Prize’s Global High Schools category, which empowers youth to play an active role in supporting their communities’ socio-economic development.

In the Health category, Brazil’s Associação Expedicionários da Saúde (EDS) was awarded the Prize for its Mobile Hospital Complex, which provides specialised medical and surgical care for indigenous communities geographically isolated within the Amazon. The objective of the Mobile Hospital Complex is to reach the most difficult areas in the Amazon, guaranteeing the safety and comfort of patients and excellence in the quality of services provided. Over the course of six expeditions from 2015 - 2022, the nonprofit organisation performed more than 1,900 surgeries that improved health outcomes, including improved vision after cataract surgery.

Ÿnsect from France was the Food category winner for its important work in insect-based protein and natural fertilisers. The SME produces insect protein and natural insect fertilisers at Europe’s first-of-its-kind insect factory equipped with innovative vertical farming and integrated biorefining setup. Ÿnsect processes two insect species (molitor and buffalo mealworms) into high-end, high-value ingredients for the entire food chain—plants, fish, farmed animals, pets, and humans. Ÿnsect is currently building a new factory in France and operates two other sites in France and the Netherlands. By 2025, Ÿnsect will be able to produce more than 1,500 tonnes of protein per month.

In the past five years, Ÿnsect has improved the lives of 30 million people by delivering sustainable, natural, premium nutrition products for fish farming (as an alternative fish feed to meet aquaculture’s food supply needs) and human nutrition. The demo plant currently operated by the company produces 30 tonnes of protein production per month.

In the Energy category, the Jordan-based NeuroTech developed Al-based algorithms with a blockchain-based transaction system to bring reliable energy access to refugee camps. The SME employs the concept of energy sharing by separating electrical loads into low- and high-priority streams. Thus, beneficiaries are guaranteed to receive their lifesaving energy, and extra energy goes to low-priority feeders, according to energy availability. Sophisticated energy management and control reduces electricity stress and increases consumer awareness about electricity.

During its pilot phase, NeuroTech helped deliver electrical power to more than 10,000 Syrian refugees in Azraq. By optimising energy usage and distribution, NeuroTech has helped reduce the pressure on the camp’s main hospital respiratory section by making electricity available 24/7. Patients now can use a personal nebulizer, a medical device used during the COVID-19 pandemic, and for people with a chronic breathing illness.

With the support of LEDARS, 5,250 bio-sands-filters, 65 pond-sand-filters, 185 rainwater harvesting systems, and 69 protective ponds were installed in communities in Bangladesh, supporting cultivation of paddies and vegetables throughout the year on lands that were previously barren. LEDARS initiatives created access to safe drinking water for at least 15,881 families. As a result of this solution, more than 12 million gallons of water have been saved.

The Chair of the Jury and former President of the Republic of Iceland, Ólafur Ragnar Grímsson, said: “This year’s winners have demonstrated a new level of creativity and ambition in their solutions to tackle pressing global challenges. We are confident that these winners will provide meaningful and scalable impact in communities across the world, and in turn accelerate important climate action goals to help secure a sustainable future for all.”

H.E. Dr. Sultan Ahmed Al Jaber, UAE Minister of Industry and Advanced Technology and Director General of the Zayed Sustainability Prize, said: “Since our nation’s wise leadership established the Zayed Sustainability Prize 15 years ago, the Prize has become a key supporter of the UAE's vision to drive inclusive climate action and international sustainable development. By providing real-world solutions in sustainability to vulnerable communities around the world, the Prize honours Sheikh Zayed’s contribution towards social good, and elevates humanity on a global scale.

“Our 106 winners are driving action to solve the world’s most pressing challenges. Through their commitment to championing positive action, millions of people who were living without access to energy, water, healthcare, or food in the developing world, now have sustainable economic and social development opportunities, including access to quality education, decent work, economic growth and improved livelihoods.”

H.E. Al Jaber added: “As the UAE prepares to host COP28 later this year, the Zayed Sustainability Prize stands as a critical reminder of the UAE’s commitment to accelerating practical solutions needed to help societies mitigate and adapt to climate change.”

Since 2013, the Prize has awarded 46 high schools under its Global High Schools category from countries around the world. Students at these schools won for their self-led project proposals that have since been implemented by the youth. Collectively, they have generated 7.2 million kWh of electricity, saved 5,700 tons of CO2 and positively impacted 427,408 people in their communities.

The winners were selected from a pool 4,538 - a record number of submissions - chosen by a panel of more than 40 experts. The Jury members include H.E. Olafur Ragnar Grimsson, Former President of the Republic of Iceland, UAE ministers, Sir Richard Branson, Founder of Virgin Group, Dr. Andreas Jacobs, Chairman of INSEAD, Jacobs Family Council, among others.